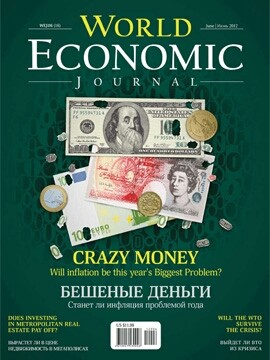 The Second Annual Investment Meeting 2012 concluded on May 3rd this year in Dubai. The forum paid particular attention to the world’s active emerging markets, developing countries, and industries demonstrating the highest rates of growth. The Analytical Information Service of the World Organization for Development conducted a special analysis of the global economy, the development of the foreign direct investments market from 1990 to 2010, and studied the model of direct investments in rapidly-growing countries, such as the United Arab Emirates and Qatar.

Overview of the Global Economy and GDP Forecasts
In 2012 and 2013, according to IMF expectations, the world’s GDP should grow by 3.3% and 3.9% respectively. Developed countries will experience a slower rate of growth (1.2% and 1.9% respectively), while the European economy is expected to slow in 2012.

Once again, China and India are expected to have the highest growth rates. In the CIS countries, the economy is predicted to grow by 3.7% and 3.8% in 2012 and 2013 respectively, and the projections for Russia are just slightly below that (at 3.3% and 3.5%).

Analysis of the Foreign Direct Investment Market
Despite the weak global economy growth seen in 2011, the world experienced an increase in global foreign direct investments. Reports put the growth rate at 17% for this period, or about $1.5 billion in volume, which is higher than pre-crisis levels of growth.

This strong growth in FDI can be partially explained by the fact that many countries are trying to attract foreign investments in an attempt to sustain economic growth, leading to liberal changes in legislation in their respectively countries to make the process easier for foreign companies.

FDI have increased in every category of country – developed, developing, and transit-economy countries, which includes the CIS countries. But over half of the world’s FDI goes to countries with emerging economies or transit economies. In 2011, the FDI volume in these groups of countries amounted to $755 billion, most of which went towards implementing new projects in these countries or starting projects from scratch (such as the so-called Greenfield Investment projects).

It should be noted that the largest increase in FDI was not in South, East, or Southeast Asia, as in 2011 (the total growth of FDI in these regions was 11%), but in the countries of Latin America and the Caribbean (35%, or $216 billion), as well as in countries with transit economies (31%). The inflow of foreign direct investments in Africa, however, is continuing to decline, which could mean the further deterioration of conditions in many African countries.

As for the FDI inflow to developed countries, the 19% growth rate after three consecutive years of decline is significant, but most of these new investments come from mergers and acquisitions rather than new companies or projects, which could help stimulate the economy. On top of that, some of the investments made in developed countries are a byproduct of restructuring large companies.

The weakening of the global economy can be explained by the ongoing crisis in the employment market. Unemployment remains very high globally at about 9%, which leads to a decrease in income and reduced aggregate demand, which then leads to poor GDP growth. FDI funneled towards projects starting from scratch (such as the Greenfield Investment projects) could help contribute some employment growth.

According to the results from 2011, FDI that were put into the creation of new global projects declined by 3% when compared with the numbers from 2010, mainly because of the FDI indicator’s reduction in developed countries. In developing countries, the growth rate only reached 1%.

The growth of FDI in Europe reached 23%, but the FDI dynamics in the Eurozone were different. In Italy and France, for example, there was an increase in FDI, while Greece and Germany experienced a decrease in FDI. China experienced an 8% growth in FDI, amounting to $124 billion, while the USA saw a 8% decrease.

In Latin America and the Caribbean, there was a 35% increase in FDI, despite the fact that mergers and acquisitions declined by 31%. This phenomenon was explained by the fact that foreign investors seek to gain the maximum amount of benefit from the expanding consumer market in this region.

The CIS countries and Southeastern Europe experienced a significant growth rate of 31% – this large increase can be accounted for by the large amount of foreign partners who are buying Russian companies, the continuing appeal of the markets in these countries, and a new round of privatization.

Overview of the Inflow of Foreign Direct Investments
The total amount of FDI accumulated in the world has increased 8.2 times over the past twenty years and amounts to $19.1 trillion (in current prices). And the amount of accumulated FDI in developing countries and countries with transit economies is gradually increasing as well. In 1990, the percentages of FDI in these two categories were 25% and 0.08% respectively, and in 2000, they were at 23% and 0.82%. In 2010, these figures grew to 31% and 3.6%, respectively. The share of FDI in developed countries fell by 10% over 10 years, from 75% in 2000 to 65% in 2010.

When it comes to stimulating domestic direct investments, the state position is particularly important. Very often, the development strategy announced by the federal (or municipal/local) authorities represents the extent to which investors are willing to invest in the development of their country.

The Analytical Information Service of the World Organization of Creditors conducted an analysis of the models used by the governments of the world’s largest oil-producing countries to attract foreign direct investments, namely the United Arab Emirates and Qatar.

Direct Investment within a Country – Dubai, the United Arab Emirates
The government of Dubai (UAE) made a decision to make the economy more diverse, less dependent on oil and petroleum products, and more focused on the service and tourism sectors, a decision that changed the entire country. Large-scale construction has turned Dubai into one of the world’s fastest growing regions – before the crisis, more than 30 thousand cranes (25% of the world’s crane supply) were working in the emirate. The construction for many large-scale projects is still continuing in Dubai today, and the government plans to implement a number of new projects in the near future.

One such project is the Dubai Investments Park (DIP), one of the key strategic development projects in Dubai. The DIP is the largest integrated project in the Middle East, and a fully owned subsidiary of Dubai Investments PJSC. The park is located near Al Maktoum International Airport and is connected to key business areas in Dubai. The DIP’s first phase of construction began in 1998, and was completed almost two years later. By 2012, the Dubai Investments Park was home to 1,060 tenants and 1,469 subtenants. As a result, the 2.5 hectare territory, which was just a desert 15 years ago, has become a flourishing city because of its investments, which gave thousands of people work.

Another example is the Dubai Internet City (DIC), an information technology park created by the Government of Dubai as a free economic zone, as well as a strategic base for companies targeting the emerging markets of the region. More than 850 companies, with over 10 thousand employees, operate in the Dubai Internet City. DIC rules allow operating companies to have tax, customs, and other benefits for 50 years guaranteed. One company model that has similar advantages is a company with 100% foreign ownership. This business model attracted the world’s largest information technology companies to the Dubai Internet City, including Microsoft, IBM, Oracle Corp., Sun Microsystems, Cisco, HP, and Nokia. In fact, these companies went so far as to move their regional base centers from other countries and cities to relocate to DIC.

Qatar National Development Strategy up to 2030
The Qatar National Development Strategy up to 2030 aims at transforming Qatar into a country with a developed and advanced economy, which can support its own development and ensure a higher quality of life for its citizens. The economy of the country is currently growing at the most dynamic pace compared to the rest of the region. The main reason for this is the country’s huge oil reserves. According to experts, there is 16 trillion dollars’ worth of proven oil reserves beneath the surface of Qatar, which will be drawn from over the next 100 years. The oil will provide all the financial support needed for the further development of the Middle Eastern state.

Under this strategy, the government of Qatar plans to invest in various infrastructure projects, as well as in the development of various economic sectors, including energy, health, education, transport, tourism, and others. More than $25 billion will be put into the construction and modernization of the country’s railways. And to accomplish all these projects, an additional workforce will be needed, which makes the process of bringing workers from overseas simpler.

According to Qatar law, foreign investors can invest in any sector of the economy, provided that they have a Qatari partner that owns at least 51% of the capital involved in the project in question.

Additionally, the share of foreign capital can reach up to 100% in projects implemented in certain segments of the economy, such as agriculture, manufacturing, healthcare, tourism, education, mining, and other segments, provided that the project meets the country’s requirements for economic development, and that the priority of the project is to optimize the use of raw materials and added product value.

Conclusions
Current forecasts by economists concerning the global investment climate remain cautious. The expected growth rate of the FDI inflow throughout the world ranges from 5-7%, or $1.6 billion, but in reality, these numbers may be lower, given the instability of the global financial situation.

Meanwhile, FDI have increased in every group of country: developed, developed, and countries with transit economies. Emerging economies and countries with transit economies continue to attract half of the world’s FDI, and in 2011, the total FDI volume for these groups of countries amounted to $755 billion, most of which was directed at the implementation of new projects or projects from scratch (the Greenfield Investment projects).

The growth of FDI in developed countries reached 19% after 3 years of decline, which is very high. However, the lion’s share of those investments come from mergers and acquisitions, rather than establishing new projects that could stimulate economic growth.

The active growth of the “investment attractiveness” of developing countries, including Qatar and the United Arab Emirates, both of which were examined in this study, can primarily be explained by the countries’ active construction and new projects, specifically designed to attract foreign businesses.

From these examples, it is clear that investing in large-scale projects supported by oil revenues, especially in the UAE and Qatar, is in full swing, and both private and foreign investors are attracted to those potential investments. According to experts, the world’s oil reserves will dry up in 50 years, which means that the extensive measures taken by the UAE and Qatar to strengthen their economies and attract investments in non-essential sectors will allow these countries to continue maintaining a high level of welfare, even after their main natural resource is depleted.

All data was provided by the Analytical Information Service of the World Organization for Development (WOD).

It is Time for an Intervention on the Market