Saskatchewan has once again led all provinces in a key economic indicator, with the value of wholesale trade increasing by 44 per cent (seasonally adjusted) between May 2021 and May 2022. In comparison, the province with the second highest growth during this time period was Alberta, which saw an increase of 20.6 per cent.

“These nation-leading wholesale trade numbers show just how strong the provincial economy continues to be,” Trade and Export Development Minister Jeremy Harrison said. “The world wants what Saskatchewan has and we will continue to work to get our products to market and bring significant investment into our province.” 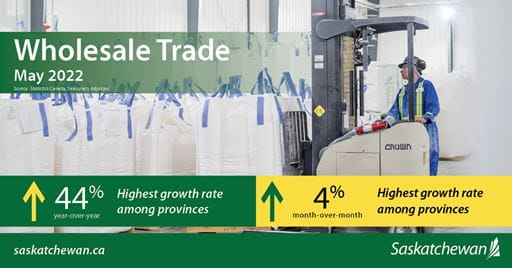 Strong wholesale trade growth was seen in the agriculture sector between April 2022 and May 2022. The farm products subsector had the highest month-to-month increase, rising 19.8 per cent. The machinery, equipment and supplies subsector was up 19 per cent, driven by strong growth in the farm, lawn and garden machinery and equipment industry.

In June, Saskatchewan’s unemployment rate fell to 3.9 per cent, the second lowest among the provinces and the lowest for the province since November 2014.