PERSONSBUSINESSECONOMY
Last updated Nov 6, 2022
178,936
Share
Articles / Rubric: Investments
Many countries do not have sufficient funds to invest in infrastructure 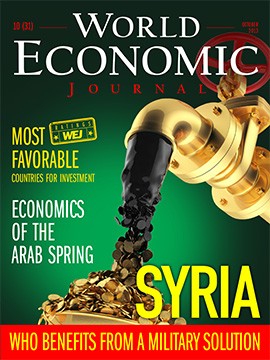 On the contrary, in order to overcome the crisis in Europe, we have to act even more cohesively. We have to review the entire plan for rescuing countries that were on the verge of default. The Eurozone countries must do it together, as 17 equal partners. We also need to decide whether the political will exists to go on to the next level, which is to interact more with the banking associations and to cooperate more closely on tax matters.

What advice would you give to political leaders on returning production to their own countries?
I fully agree with you: This could certainly revive the economy, cutting both unemployment and inflation. Of course, many countries do not have sufficient funds now to invest in infrastructure, so it is important to attract private investors, and in general, to promote the private sector. The structure of the tax system should also be reviewed: Tax rates in Europe should be reduced, so that companies looking for a favorable fiscal regime do not take their business offshore. It is important not only to support entrepreneurial activity, but also to provide favorable conditions for employment of university graduates, because the unemployment problem now primarily affects the youth.

You have done a lot of work on the topic of unemployment. What measures are most effective in solving this problem?
The main reason for unemployment in Europe is the continual job cuts, so the solution is obvious: Stimulate economic activity, especially in the service sector, which can develop quite rapidly, continually creating new jobs. The state, for example, can provide interest-free financing for entrepreneurial start-ups, and also, as I said, help companies to hire young people who have just graduated from university, even by providing initial financial support and not at great expense.

Professor Pissarides, what projects are you working on now?
I am studying in unemployment in Europe, and analyzing how to create jobs, which sectors are most active. This project is sponsored by the European Commission and the University of Cyprus. Therefore I am spending a lot of time in Cyprus now.

Many countries do not have sufficient funds to invest in infrastructure
178,936
Share