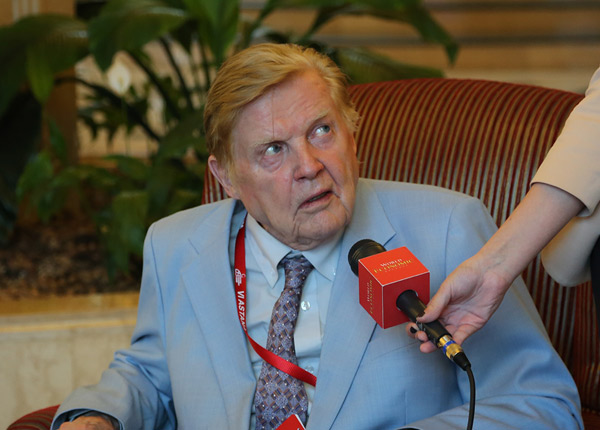 Professor Robert Mundell, Nobel Prize winner in economics and the person known as the “father” of the euro, visits the Chief Editor of the  World Economic Journal Robert Gubernatorov.

– In the foreseeable future, is there a possibility of a third global currency (along with the dollar and the euro) emerging in Asia?
– That strong currency would most likely be the renminbi (yuan). If China’s GDP keeps growing at the same rate over the next 10 years, it could catch up to the U.S. So I don’t rule out that by somewhere around 2025 the world could have three main currencies: the dollar, the euro, and the yuan. Moreover, the Japanese yen has a chance at becoming the fourth world currency unit. It’s also possible that the British pound could advance and become a fifth currency. But there is a lot of competition between the Chinese and Japanese currencies and if the dollar and the euro calmly interact with one another, the yuan and yen don’t. Overall, some countries could be part of a single currency zone which doesn’t require them to use a single currency, but would simply requires them to regulate the currency exchange rates in that region, that is, to set the ratio of the euro and dollar, for example. Changing the currency of your country to another one is a serious political move and no one will go for being in a country that swings between two currencies. That’s why creating a single currency for the entire Asian region doesn’t seem possible to me. Maybe they’ll ‘make friends’ later, but for now the Asian countries can perfectly well keep their own currencies and simply regulate the exchange rates.

-But is there a need for a new global currency? The debate over the viability of introducing the euro has not yet quieted down and new EU members are in no hurry to join the Eurozone…
– Up until 1970, the U.S. economy was a kind of cushion and reserve barrel for the global economy. But now this barrel has been divided into two parts: the European Monetary System and the dollar bloc. This division could be compared to a large planet splitting into two parts that are constantly competing with one another. And if we’re talking about the dollar and the euro, the exchange rate of these two currencies is constantly changing and these changes are quite serious. This is a large, and perhaps even the main, problem in the instability of the global economy. Today, the dollar isn’t the most stable currency, but together with the euro, they continue playing the role of the same cushion for the global economy. What the world now needs is to stabilize the dollar and the euro so that the other countries would establish and regulate the relationship of their currencies to the dollar and the euro. On that basis, the International Monetary Fund could launch a new global currency. In my opinion, this is the most suitable and necessary international monetary policy.