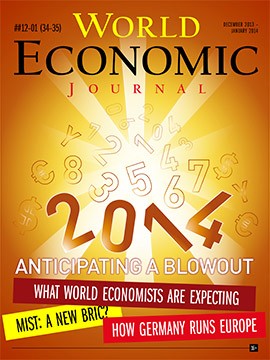 After 12 years, the group of countries known as the BRIC remains one of the main drivers of growth in the developing sector. The pace has slowed somewhat in recent years though, and experts are pointing to a new group of potential leaders, known as the MIST. Are Mexico, Indonesia, South Korea, and Turkey really able to overtake the BRIC? Or was the new acronym created to attract the attention of foreign investors to these countries, in hopes of increasing investment flows there, as occurred with the BRIC after 2001?

In 2001, Jim O’Neill, head of Asset Management at the U.S. investment bank Goldman Sachs, coined the acronym BRIC to designate the four major fast-growing economies – Brazil, Russia, India, and China. He said that these countries would increase their economic clout and investments there would bring a good return all the way to 2050. In 2011, South Africa, thanks to its robust economic growth, joined this club of the promising and most investment-attractive economies; the acronym was expanded to BRICS. Meanwhile, back in 2005, O’Neill had created an alternative BRIC, a list of developing countries with good potential for future growth, calling it Next-11. He predicted that all the countries on the list – Turkey, Egypt, Bangladesh, Pakistan, Nigeria, the Philippines, Mexico, South Korea, Indonesia, Vietnam, and Iran – have the potential for annual growth of 4% over the next 20 years. Then in February 2011, Goldman Sachs launched a special fund for shares in N-11, which by 2012 had reached $113 million in assets.

In 2011, the growth of the BRIC countries had already begun to slow down, and investors withdrew about $15 million from the BRIC fund. The weakening economies of this quartet led several international publications to predict that things would get no better, and that the acronym BRIC and the economic significance attached to it no longer had the right to exist. Many experts agreed, including analysts at S&P, who asserted that the current format of the BRIC is actually no more than “China plus three.”

Reflecting this frustration, in 2012 O’Neill proposed a new quartet of potential leaders, drawn from the Next-11: Mexico, Indonesia, South Korea, and Turkey, or MIST. Each of the MIST countries, he forecast, can add 1% to annual global GDP. Mexico, Indonesia, Turkey, and South Korea account for about three quarters of all investment in the Next-11 general fund. The Next-11 fund itself had a growth rate in 2012 about four times higher than that of the BRIC fund: 12% vs. 3.2%. One should not forget, however, that the BRIC countries accounted for more than half of world GDP that year, even though their growth rate is currently half what it was, for example, in 2007.

Indonesia is the growth leader among the MIST countries, according to IMF forecasts; its economy is expected to increase by 5.3% in 2013 and 5.5% in 2014. Obviously, these growth rates are much lower than those of the BRIC leader. The Turkish economy’s growth in 2013 is comparable to the Indian figure: 3.8%. But in 2014, according to the IMF forecasts, Turkey’s growth will slow to 3.5%, whereas India’s economy will grow by 5.1%. Thus, 2:0 in favor of the BRIC.

South Korea is the third-ranking country in terms of growth of the MIST group, with growth forecasts for 2013 and 2014 of 2.8% and 3.8%, respectively. This is higher than Brazil’s figure, and the BRIC:MIST score now becomes 2:1. The slowest-growing economy of the “new quartet” is Mexico. In 2013, its growth rate is 1.2%, according to the IMF, which is lower than the BRIC’s lowest-ranker, Russia (1.5%). In 2014, thanks to Mexico’s production and export boom, growth will increase to 3%, which is equivalent to the forecast for Russia. But given the pace of growth in 2013, the final score for the competition between BRIC and MIST becomes 3:1.

Meanwhile China’s still-rapid growth rate (even considering the slowdown) is ahead of any other countries of either the BRIC or the MIST. The conclusion is obvious: In the foreseeable future, the MIST countries will not be able to overtake the BRIC, neither in terms of absolute size of the economy, but also in rate of growth.

“I believe that the BRICS remain systemically important and will continue to grow, and that China’s success or lack thereof will have a major effect on all other developing economies – BRICS, MIST, and others,” said Michael Spence, 2001 Nobel Prizewinner in economics, in an interview with WEJ. “The Chinese economy is not much smaller than the sum of the other BRICS, plus Indonesia and Mexico. The MIST economies are also important and of interest to investors. Korea is a bit misplaced, as it is an advanced economy by income level.”

However, many studies have shown that the MIST countries have a more favorable environment for doing business, which leads to a greater increase in investment in these countries than in the BRICs. Among the eight states in the two groups, South Korea is the leader in the IMF’s Global Competitiveness Index and the World Bank’s Doing Business Ranking. Nobody doubts the international competitiveness of the South Korean economy; it exports 43% of its GDP, mostly manufactured goods. And Indonesia, which is already the 16th-largest economy in the world, will become the seventh-largest by 2030, according to the McKinsey consulting firm. The IMF’s Global Competitiveness Index for 2013 identified Indonesia as one of the most efficient countries in the developing Asian region. Mexico is also on the rise, with exports already at 32% of GDP and rising. The share of manufactured goods in total exports has increased almost fourfold since 1985. And there is every reason to believe that Mexico has succeeded in kicking the “oil habit,” since the share of oil in Mexico’s exports declined in this period from 9/10 to 1/10. Mexico today exports more goods than all the rest of Latin America combined. And analysts from the Boston Consulting Group and Barclay’s believe that Mexico will soon overtake China as the world leader in production, while the Japanese financial holding company Nomura Group predicts that by 2020, Mexico will be become the first Latin American economy to overtake the current leader in macroeconomic indicators, Brazil.

Given this trend, there is every reason to believe that in the long term, the MIST countries have every chance, if not to overtake, then at least to catch up with the BRIC countries. “Despite the fact that now the BRIC economies are larger and their growth rates are still higher, in the long run the MIST countries will catch up,” say experts at Grail Research.

Thus we come to one simple conclusion: MIST is not an alternative to BRIC, which is still growing rapidly; but Mexico, Indonesia, Korea, and Turkey also have their own competitive advantages.

“There seems to be a natural tendency to think its one or the other,” said Michael Spence, summing up our discussions. “In this case, at least as I see it, it is not BRICS or MIST, but BRICS and MIST; not Brazil or Mexico, but Brazil and Mexico driving developing countries’ growth.”