The revival of global macroeconomics exists only in words, while in reality the situation in many countries remains extremely difficult. According to the preliminary results for 2012, global economic growth was only 3.3%, while for the majority of large developed economies it was zero. It’s no wonder that UNCTAD, summing up the results for 2012, noted the 18% reduction of global growth of foreign direct investments (FDI). Analysts of the World Organization of Creditors are confident that investments in developing markets look much more logical and promising today.

General Downward Trend
Last year definitely wasn’t an easy one: Investors were troubled by several factors at once, including the eurozone crisis, the threat of the “financial cliff” in the USA, and changes of government in several large countries, which will undoubtedly influence the investment policies of the states. Thus the positive trend of increasing FDI during the last three years came to naught. According to UNCTAD’s preliminary results, in 2012 global foreign direct investments fell by 18.3% ($300 billion) and amounted to $1.3 trillion. 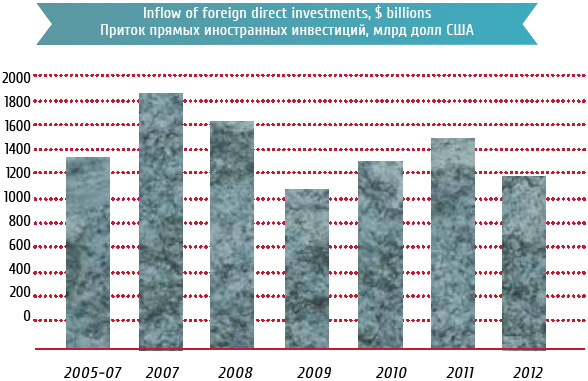 Decrease in FDI flows is noted in virtually all groups of countries, but the losses were particularly evident in the developed economies. At the beginning of the 2000s, those countries received almost 80% of FDI, while developing economies got no more than 20%. But over the last 12 years, the latter managed to pull in more than half the world FDI. 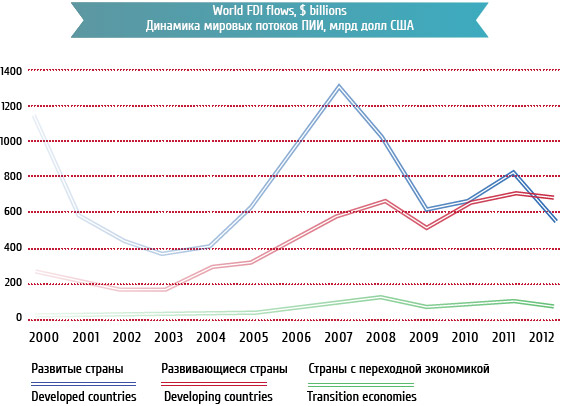 According to UNCTAD, developing economies were very popular among investors in 2012, despite the slight 3% reduction in FDI. Asia and Oceania turned out to be the least popular developing regions, with FDI flow there decreasing by 9.5%. Meanwhile, FDI in Africa and Latin America continued to grow by 5.5% and 7.2%, respectively.

Meanwhile, last year the EU and the United States received 35% less FDI than in 2011. That is why, compared to the one-third decrease in FDI inflow to developed countries, the 3% decline in developing economies doesn’t look disastrous. A steep decline of interest in the USA wasn’t critical for that country either: America remains the largest recipient of foreign direct investment in the world.

The transition economies turned out to be the most stable with regard to FDI. UNCTAD experts refer to Southeastern Europe and the Commonwealth of Independent States (CIS) as such economies. However, total FDI decreased slightly in these regions as well: They received 13% less than in 2011. 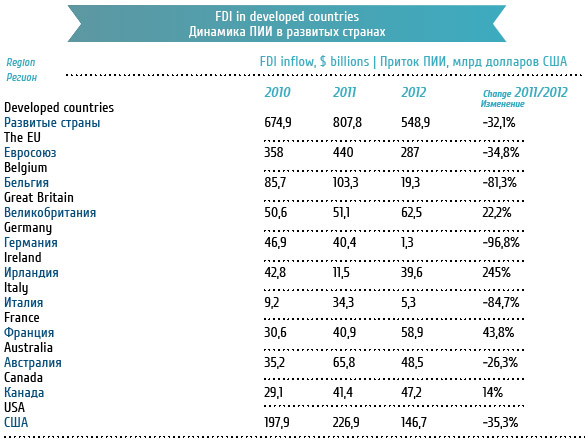 The Eurozone
As mentioned above, FDI flows into developed countries in 2012 decreased sharply, hitting a 10-year low. While in 2011 investments in Belgium made up virtually a quarter of the whole FDI into the EU ($103 billion), in 2012 this flow decreased by 81%, not even reaching the $20 billion level. Germany suffered even greater losses, receiving only $1.3 billion as compared to $40 billion the previous year.

However, some European countries managed to catch investors’ interest. For example, flows to Great Britain and France increased by 22% and 44%, respectively, while investments in Ireland increased by 245%. Analysts believe that this positive trend in Ireland is not a fluke and that it is indicative of the country’s ability to overcome the crisis. At the same time, the crisis in Greece, Portugal, and Spain continues to worsen, affecting FDI inflow. In 2012 they were joined by Italy, where the recession has led to asset sales and loan repayment instead of new investments.

Developing Countries and the CIS

During the last 12 years, investors’ interest in developing countries has been gaining momentum. Only 2009 was an exception, when investors decided to hunker down and restrict themselves, but that decline was offset within a year, and now FDI continues to increase. The interest in Southeastern Europe and the CIS countries is increasing more slowly than elsewhere: Pre-crisis volumes haven’t yet been recovered. Nevertheless, FDI inflows to Africa have been stable from the beginning of the 2000s, with no sharp fluctuations. 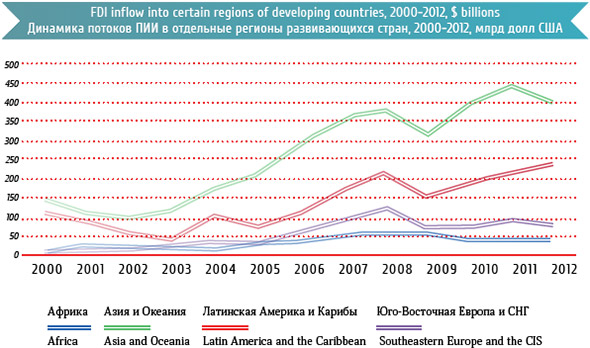 Although overall FDI flows into developing countries decreased by 3.2% in 2012, this indicator rose in many large economies. For example, in Latin America, stable inflow of FDI is noted in Argentina, Colombia, Peru, and Chile. The volume of foreign direct investments into these countries has been increasing for three years now. Interest in Brazil has slightly attenuated: FDI decreased 2%. Nevertheless, Brazil remains the largest recipient of investments in the region, accounting for 28% of the whole volume. 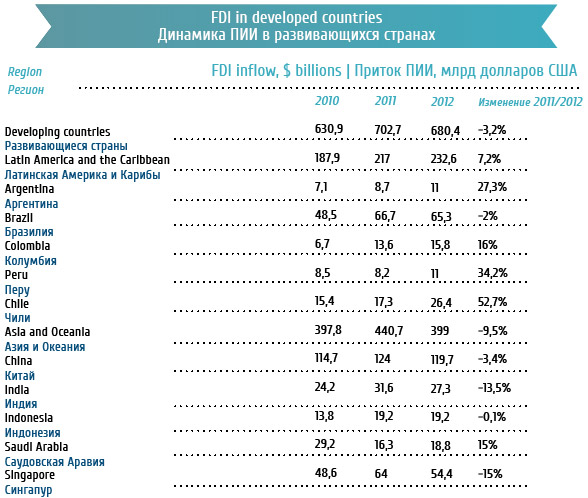 As for Asia, FDI declined by almost $5 billion in China, which is rated the second largest investment recipient. However, 7.8% economic growth in the country in 2012 is a good motivation for investors, adding to their confidence in the future. Besides the declining interest in China, FDI also decreased in India, Singapore, Turkey, and South Korea.

General instability in the Middle East affected investments in this region, although Saudi Arabia still interests investors. At the end of 2012, the FDI into this country increased by 15%, which reinforced its leading position among other countries of the region with regard to investments. Given the interest of investors in Saudi Arabia, the overall 3.3% decrease in the FDI flow in the region wasn’t that significant.

In the CIS countries, the 2012 inflow of foreign direct investment decreased by 9.9%. More than half of the $78 billion received ($44 billion) was accounted for by Russia, which is 16.6% less than in 2011. Kazakhstan and Ukraine, on the other hand, sparked investor interest and increased their FDI volume by 13.4% and 11.5%, respectively. However, the aggregate achievements of these two countries couldn’t compensate for the decrease in FDI volumes in Russia.

What to Expect
UNCTAD experts hope for slow recovery of global FDI up to $1.4 trillion this year and $1.6 trillion in 2014. The key macroeconomic indicators are expected to grow gradually, both globally and in many developing countries. This should motivate investors to make new strategic investments. However, the prognosis for developed countries is still pessimistic: Restoration of investors’ confidence in these regions will take time.

According to the WOD