Back to the CSSR 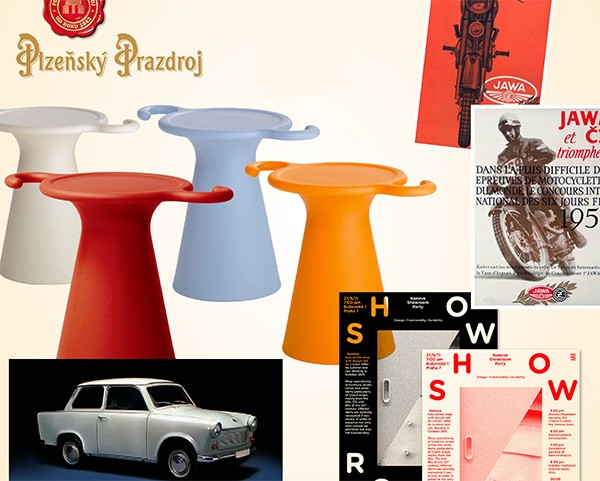 The Soviet planned economy still draws nervous laughter and a number of questions from those who follow the Chicago school of economics. Products coming off the assembly line often had nothing in common with what consumers wanted. Mounds of identical fake-leather sandals sat in warehouses, while Polish and Czechoslovakian furniture manufacturers intentionally made heavier legs for tables and chairs, since manufacturing quotas had been set in kilograms.

Retro things are more popular today than ever before – hipsters en masse are buying up Zenith cameras and old stocks of Orwo film made in East Germany. A few years ago, their Czech counterparts opened up Nanovo, a furniture and household goods store that sells items made during the 1950s-’70s, at high prices.

It’s more or less comprehensible why people have an affinity for retro items – the simplest thing to do was to redirect the nostalgia of the post-Socialist transitional period towards consumerism. Flea markets for the trendy have moved online. Here we could discuss the particular features of the collective memory of the Warsaw Pact countries and why young parents who walk with their babies in the new areas of Dresden prefer the bulky, Soviet oilcloth strollers; but it would be much more interesting to see what has happened with the same industries over the 25 years since the fall of the Iron Curtain. One would think that, outside of the planned economy, most of the brands we longingly recall would have sunk into oblivion, but is that what actually happened?

Time magazine once named the 1975 Trabant one of the “50 Worst Cars of All Time,” calling it “a car that spoiled the face of communism.” Like many other brands in East Germany, the Trabant didn’t survive the reunification of Germany: the last car left the assembly line in 1990. In 1991, production was closed. But East Germans preferred the Trabant, which ran less capriciously than a second-hand Volkswagens.

Unlike its German counterparts, Jawa, a Czech motorcycle company, managed to stay afloat. Production fell sharply, of course, after the 1989 Velvet Revolution, and the Soviet Union – the main market for Czech motorcycles – ceased to exist two years later. However, the company continues to manufacture their classic models, but equips them with Honda engines. In addition, Jawa’s motorcycle production is part of an economic partnership between the Czech Republic and Cuba: Part of the production was moved to a socialist sanctuary.

Things are in much better shape in the beer industry. Plzeńský Prazdroj is another brainchild of the Soviet-era Council for Mutual Economic Assistance [“Comecon”] and was the most popular foreign beer in the Soviet Union. Over the past 25 years, the company has changed hands several times and has taken over several large Czech breweries. In 2002, Pivovar Radegast and Pivovar Velké Popovice merged to form AO Plzeńský Prazdroj. In 2012, Plzeńský Prazdroj beer, marketed under the brand name Pilsner Urquell, reached a record 920,000 hectoliters. In the same year, 9.9 million hectoliters were sold in the Czech Republic. Plzeńský Prazdroj can rightly be called a giant in the global market.

Another international corporation coming from the Czech heartland and which managed to survive the planned economy is the Bata Shoe Corporation, which was founded in 1894 by the Bat’a brothers, Tomáš and Antonín. The shoe company achieved prosperity during the First Czechoslovak Republic, between the First and Second World Wars. By the time the Protectorate of Bohemia and Moravia had come about in 1939, the corporation could already boast 16,000 stores, half of which were in Czechoslovakia and the other 8,000 scattered through 63 countries. In addition, the corporation owned a section of the railways and an airport, a number of shoe and related goods factories, as well as virtually the entire town of Zlín, where the company was founded.

After World War II, the company’s assets in Czechoslovakia were nationalized and the founders and their decendents emigrated to Canada. Authorities of the Czechloslovak Socialist Republic (CSSR) used the industrial assembly lines to make shoes under the Čebo brand, which were intended for export to other countries in the Eastern Bloc. The brand went out of existence together with the CSSR, but in 1991 Tomáš Baťa’s descendents returned to Zlín and brought the plant back into operation. The shoe corporation currently operates in 90 countries and boasts a line in the Guinness Book of Records, having sold more than 14 billion pairs of shoes since its founding.

While the Bata Corporation has a lock on global markets, another Czech shoe company which manufactures the iconic Botas tennis shoes, decided to re-release their most successful model, the Botas 1966. In the early 1990s, the company had almost completely stopped producing their so-called “botas” sneakers and focused their attention on producing skates and ski boots. But in 2008, two students from the Academy of Arts, Architecture and Design in Prague developed their own vision of the classic botas and took first place in the European Design Awards. The success of their school project drew the interest of the company’s management, and as a result, Botas has released 13 variations of the classic 1966 model. By 2013, botas accounted for 5 percent of the company’s sales and continues to grow.

New Challenges for the BRICS