Are tax havens harmful to the global economy? 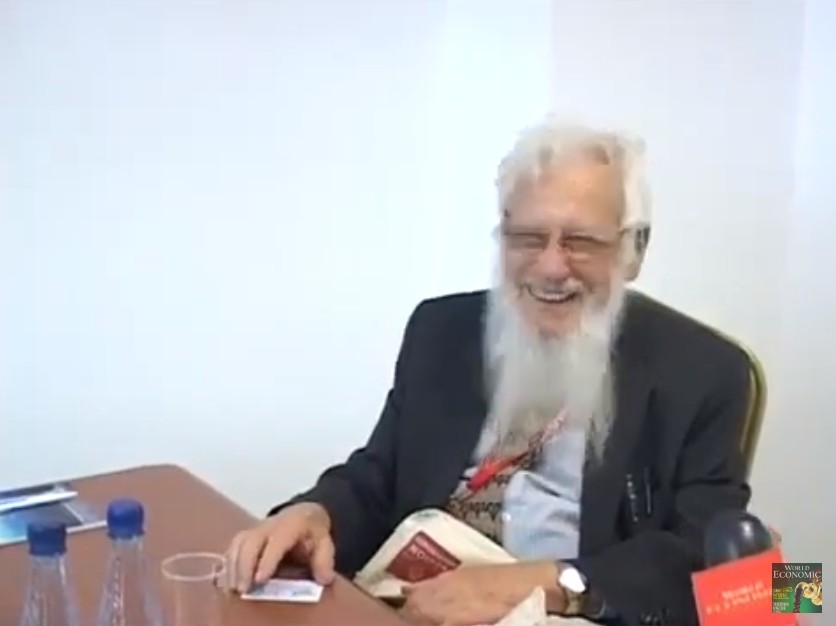 The Chief Editor of the World Economic Journal Robert N. Gubernatorov visits Professor Robert John Aumann. Aumann is a Nobel Prize Laureate in Economics for his game-theory analysis of conflict and cooperation.

How do you rate today’s established world order and how do you see the world in the near future? Twenty years ago it was two-pronged, with the USA on one side and the USSR on the other. What vectors do you see in the new world?
Journalists have a tendency to constantly be looking into the future and making predictions about it. But few get it in their head to compare the present reality with the past forecasts of experts. I think that in 10 years, still no one will be looking at whether Professor Aumann’s predictions came true or not.
Back in 2008, I had thought that the world would come out of the crisis relatively quickly. As we now see, my forecasts didn’t come true, so now I prefer to refrain from speculating.

The world just wasn’t as smart as you. I’m not expecting clear cut predictions from you, but rather to exchange ideas and reflect together… For example, let’s discuss the issue of tax competition.
I think that in the context of a global economy, different countries simply can’t have tax rates that are very different. Because if one country has much lower taxes than another, then people will choose the country with lower taxes. And this rally happens on a regular basis. In France, just a few months ago, a very wealthy and prosperous citizen got on his private plane and moved to Belgium. France was incredibly angry at him, but the anger didn’t help. There was a similar story in Israel.

Let us recall the basics of economic theory, the Adam Smith theorem: The market determines the price. You can’t have one store selling bananas for 1,000 rubles per kilogram while another sells them for 100. It won’t work. The same situation is happening now with taxes around the world. The market sets prices on its own; you don’t need a central government to do so. In the same way, the international market dictates tax rates that are more or less uniform.

Yes, but the market can’t regulate itself or prevent free offshore zones – for that, you need a political decision. Do you see the UN as one of the major regulators of global economic governance? Or would this role be carried out by some other body?
As for the UN, the answer is a definite no. The UN is impotent. Concerning so-called “offshores,” eventually it might be necessary to move to greater reliance on forms of tax other than income tax. Or, the issue of residency may be redefined. This will work itself out. Here again, the market will work.

Taxes do not have to be absolutely uniform, you know. They only have to be not too far apart. For example, I prefer living in Israel to living in Kazakhstan, even though the top marginal rate in Israel is 50% and in Kazakhstan it’s only 13%. People do not determine where they live only on the basis of tax rates.

Which raises the question: Who will regulate this process?
It doesn’t need to be regulated, although my opinion could be wrong once again. I believe that the market regulates itself, and that works. True, not 100%, but it works better than having regulators. They only need to provide three things: honesty, transparency, and competition.

In your lecture “War and Peace,” you propose considering long-term military conflicts as repeating games. What is your view of today’s arms race, and whether the Gordian knot of the global economic crisis could be cut only by war?
God forbid, what an awful suggestion! I still have hope that it will never come to a world-wide military conflict and we will be able to survive and find ways to solve problems peacefully.  Yes, I must admit that World War II pulled the world out of the economic crisis, but humanity paid a  huge and unbearable price. I am totally against this idea.

Incidentally, I am very worried about environmental problems. Not so much about global warming and such, but the destruction of flora and fauna. We are leaving our children in a much less plenteous world, where there will be fewer living and beautiful things. This, in my view, is a problem of no less importance than the economic crisis.

Are tax havens harmful to the global economy?
198,031
Share