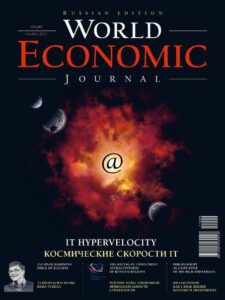 The main topics of the October issue of the World Economic Journal:

WORLD ECONOMY
Leaders of technological progress and financial prosperity:
They changed the world by stuffing it with electronics and information flows. The conveniences of both have made consumers all over the world mega-loyal to these benefactors, and the corresponding turnovers have made their companies mega-successful.

DIARY
Calendar of business and political and economic events in October.

REPORTAGE
Over ten years, the number of participants in the International Investment Forum in Sochi has grown 40 times. This year’s anniversary event brought together more than 8,000 participants from 47 countries. The results are impressive: contracts worth more than 880 billion rubles ($29.4 billion) have been signed.

STATISTICS
On the eve of the X International Investment Forum in Sochi, the World Organization of Creditors (WOC) conducted a study of the investment attractiveness of Russian regions.

WORLD
Following the S&P downgrade of the US credit rating, the stock markets temporarily went into a mass hysteria. Leading analysts of the world started talking about a new wave of the crisis. Where can we expect this new outbreak – from the United States with its inexorably growing public debts, or from Europe, which is rolling through the chain reaction of default-dangerous budget deficits that began with Greece?

INDUSTRIES
Many companies pay great attention to corporate social responsibility, citing it as an argument in favor of having a long-term development strategy and the sustainability of their business. Responsibility to customers, the financial system and society as a whole contributes to the successful development of modern business.

Against the backdrop of the growing problem of diversification of the Russian economy, which is still burdened by the raw material dominance, at least one non-resource industry is demonstrating significant progress. We are talking about the Russian information technology industry.

COMPANY
Chinese Lenovo entered the top three world leaders in the personal computer market, displacing the Taiwanese Acer. The company, once created by a small group of Chinese scientists, managed to win 12.2% of the global PC market! In a matter of months, Lenovo managed to recover from the financial crisis and become the fastest growing high-tech company in the world.

TRAVEL
The purpose of the 10th annual Enduring Vision ceremony is to raise funds for the Elton John AIDS Foundation, as well as to encourage those who are not indifferent to the fate of others with awards for charitable work. It will be possible to spend an evening with the most stellar philanthropists of our time and make a feasible contribution to a good cause on October 26 at the Cipriani restaurant on Wall Street in New York.

LIFESTYLE
I am glad that the number of charitable foundations and organizations has recently been growing, as well as the prestige of the most famous of them. Charity dinners and balls provide an opportunity to join the noble tradition of philanthropy, find like-minded people and just have a great time in the company of world stars. Helping others is not just a fashion trend, but a way of life.

PRIVATE CONVERSATION
Only an effective Russian manager can enter the foreign market and remain a winner there. Restaurateur Mikhail Zelman managed to create a real gastronomic empire in eight years, which conquered gourmets not only in the cities of Russia and the CIS countries, but also in England and Switzerland.

DETAILS
Cufflinks not only effectively complete the image, but sometimes create it. After all, it is this seemingly small and optional accessory that is able to unobtrusively, but convincingly tell others about its owner. A mistake made when choosing can become unforgivable, destroy the image of a business person.

SCENE
Oddly enough, but autumn gives us reason for optimism. Right now it’s time to make a raid on long-loved cafes and restaurants, because with the onset of the new season, their menus and cocktail cards have been updated.