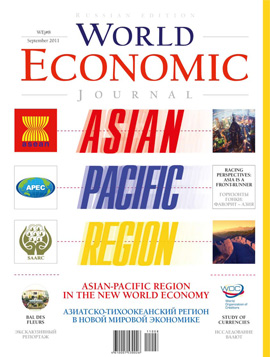 The main topics of the September issue of the World Economic Journal:

DIARY
Calendar of business and political-economic events of autumn.

At the end of July, an agreement on cooperation between the chambers of commerce and industry of Russia and Nepal was signed in Moscow. This is the result of the visit of the Nepalese public-private delegation to the Russian Federation.

STATISTICS
The World Organization of Creditors (WOC) has published a study of currencies that have the best risk/return ratio in the long term.

WORLD
China has firmly established itself as the second-largest economy in the world. While the second. But just over ten years ago, China was only in seventh place in terms of GDP.

The Asia-Pacific region is turning into a political and economic center of the planet comparable to the North Atlantic.

INDUSTRIES
Flavors, colors, sweeteners, preservatives, and other artificial ingredients are used in most food production. Their worldwide sales annually amount to more than $30 billion.

Chairman of the Board of Directors of Concern General Invest (CGI) Vincenzo Trani told WEj about the decline of the West and the prospects of the East, the investment potential of Russia, and the investment illiteracy of its population.

LIFESTYLE
The best brands and producers of wine. How to choose and store wine. Popular wine places in Moscow and festivals in Europe.

From September 29 to October 2 in the homeland of golf, in the Scottish town of St. Andrews, the Alfred Dunhill Championship will take place. Golf is the game of kings, which, oddly enough, was invented by the shepherds of the kingdom of Fife.

PROJECT
Cap Ferrat on Cote d’Azur is the main place of attraction for those without whom the international VIP list cannot be imagined today.

Here, at the villa of Baroness Ephrussi de Rothschild, the Bal des Fleurs is held annually, one of the most coveted and hidden from prying eyes events of secular Europe. This year, the World Economic Journal acted as an information partner of the Ball of Flowers.

IN VINO
Since ancient times, mankind has been looking for truth in wine. Recognizing the true taste of the wine itself is always better in its homeland. Today it is not difficult to choose a tourist route to any wine-growing region.

To independently choose a worthy wine from all the variety presented on the shelves of wine cellars, or to show yourself as a connoisseur among sophisticated connoisseurs, you just need to learn how to read! The label and the bottle will tell a lot about their contents.

PRIVATE CONVERSATION
The sophistication of Almaz-Holding jewelry leaves no one indifferent. The company is one of the industry leaders in Russia.

President of Almaz-Holding Flun Gumerov spoke about the gold of the world, the bear hunt, and the Kostroma ballet WEj.

IMAGE
Throughout the history of fashion, designers have consistently turned to the theme of nature. This season is no exception. This time the couturiers and jewelers breathe in unison, inspired by long journeys and adventures on the prairies.

In pre-Mongol times, Nikolskaya Street was part of the Great Vladimirskaya Road, which connected the Kremlin with Rostov the Great, Suzdal, and Vladimir. The street suffered more than others from fires, but, after burning down, was rebuilt again.

SCENE
A good meal is not possible without the right accompaniment. Wine not only “accompanies”, but also “reveals” the dish. For a decent assortment of wine lists and sommelier assistance, you don’t have to go to Europe, it’s enough to know the right places in Moscow.