The main topics of the August issue of the World Economic Journal:

DATA
News from the world of business, economics, science, and politics

DIARY
Calendar of upcoming business and political and economic events

REPORTAGE
The largest international exhibitions GIFA, METEC, THERMPROCESS, and NEWCAST under the general slogan “Bright World of Metals” were held from June 28 to July 2 in Düsseldorf.

Astana Mining & Metallurgy 2011 (AMM-2011) was held under the patronage of the Ministry of Industry and New Technologies of the Republic of Kazakhstan (RK) for the second time. Congress approved the status of a significant international platform.

STATISTICS
The International Organization of Creditors (WOC) conducted a study of the world’s international reserves to determine whether the yuan, ruble, and other currencies of emerging economies can really take their rightful place next to traditional reserve currencies.

WORLD
2011 will go down in history as one of the busiest years for non-ferrous metallurgy. The already permanently fluctuating world market of non-ferrous metals this year is breaking records of sharp throwing from positive to negative and back.

INDUSTRIES
Last December, we assumed that China would not, like the European Union, increase Russian gas imports and then demonstrate its desire to achieve diversity in the ranks of gas suppliers. The validity of these forecasts was confirmed in mid-June. China refused to sign a contract with Gazprom for the supply of about 60 billion cubic meters. m of gas per year at a price of $330 per thousand cubic meters.

Mutant strawberries, dried fruits with the aroma of car exhausts, an apple polished to a shine… The WEj reviewer is worried about the health of our readers and therefore decided to find out what food manufacturers offer for their internal use.

COMPANY
The largest titanium producer in the world is located in the Russian Federation, in the Sverdlovsk region, – this is the VSMPO-Avisma corporation. There is reason to believe that the position of this company will remain strong. Favorable market conditions contribute to this.

Jonas Nordlander, the founder of the largest Swedish online auction in Scandinavia, tradera.com, currently owned by the world market leader eBay, and the largest ad site in Russia, avito.ru, spoke in an interview with WEJ about how to turn a student’s idea into multimillion-dollar Internet projects.

Autoflot hassle-free. Operational leasing in the West and in Russia

PROJECT
The process of destruction of chemical weapons has given rise to an entire industry that builds appropriate plants and manufactures specific equipment for them. The turnover of this “market” in Russia is estimated at 30 billion rubles a year.

LIFESTYLE
Your time. How to organize it and become successful, in-demand, and fashionable

TRAVEL
From August 31 to September 10, the Venice Film Festival in its traditional residence – on the island of Lido – will host the most demanding connoisseurs of cinema and show the work of the main intellectuals of the film industry

AHEAD OF THE TIME
Time is an irreplaceable and strictly limited resource. Often it is the ability to plan your day correctly that distinguishes a successful person from a loser. To help the eternally busy, there is a valuable assistant – time management. 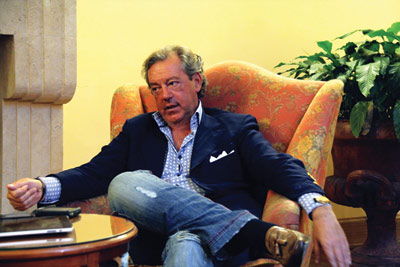 IMAGE
Having crossed the Rubicon of a single style in the second decade of the new century and having fallen into the era of stylistic timelessness, which received the name “polystylism”, we got a happy opportunity to live the entire twentieth century in one season. Which we will certainly do in the fall of 2011 and in the winter of 2011-2012.

CARS
Not wanting to waste a minute of time, strong-willed and ready for vivid impressions give preference to a car, as if intended to rush along the track, cutting through the air.

LOCATION
The tradition of lunches, which came to us from the West, successfully took root and took root. And no wonder, because the advantages of a balanced lunch when discussing business issues are undeniable.