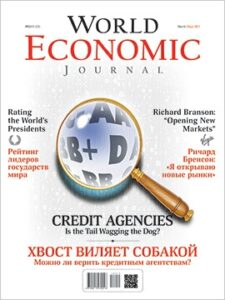 The Main Topics of the March Issue of the World Economic Journal:

The question that comes up whenever new ratings are released is whether the global rating agencies do not actually reflect the economic situation, as much as they influence the international financial markets by what they themselves do. How fair is that statement?

The World Economic Journal put together a mini-rating of successful Presidents in 2012. The leaders listed here are very different, but their popularity at home can’t be denied.

For more than half a century, France has been experiencing an influx of emigrants and migrants. Today, amid the euro crisis, another problem has surfaced: unemployment.

Industrial companies that moved their production sites many years ago to countries with cheap labor are moving back home.

The Continent
Captains of Estonian Economy in No Hurry

Estonia has lowered its growth forecasts for next year. A decline in exports is to blame, analysts say. Plans to catch up to pre-crisis levels are estimated to take two to three years.

Russia had been negotiating accession to the World Trade Organization for almost 19 years, and after it finally happened, many of the barriers that states had erected against Russian goods were not removed.

Threats
Why France Went to Mali

It wasn’t possible not to send troops to Mali, where Islamists were close to taking over the entire country.

The CIS’s economy is still far from being stable, and export volumes are still modest. But it is obvious that the Commonwealth will be stronger in the near future

Person of the Month
Richard Branson: “I Have Turned Quite a Lot of Industries on Their Head”

One of the most daring businessmen in the world and founder of the Virgin Group talked with the WEJ about helping start-up companies and space exploration.

The boom in U.S. gas production is beginning to bear fruit for the economy.

Opinion
Anatoliy Kazakov: “The CIS Has a Rich Domestic Market”

Chairman of the Coordination Council for the CIS Economic Development Business Center, spoke with World Economic Journal about economic integration and innovation in the Commonwealth.

Renault radically changed its strategy in order to survive.

Consumerism
Recognizing the Chinese by Name

In the eyes of hundreds of millions of consumers, the “Made in China” stamp is still primarily associated with cheapness and low quality.