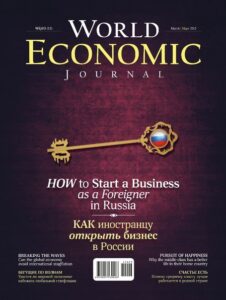 The Main Topics of the March Issue of the World Economic Journal:

STATISTICS
Growing Point
On January 25th, a session of the International Economic Forum gathered in Davos, where the current global risks were discussed. The session found that many risks were direct results of the 20th Century Population Explosion. Prompting the World Organization of Creditors’ (WOC) Analytical Information Service to conduct a study predicting how population growth would affect the quality of life on the planet.

The Pursuit of Happiness
Sociologists have recently concluded that immigrants, when moving from developing to more prosperous countries, see a decrease in satisfaction and self-esteem in their new lives for many years. In addition to being an important social fact, this discovery could influence new breakthroughs in the study of social-economics. If scientists can find a connection between the socioeconomic development of a country and the levels of frustration in its citizens, economists will be able to make more accurate predictions concerning the different countries of our world and the investment climate of entire regions.

“People Cannot Predict What Will Make Them Happy”
Carol GRAHAM, a professor of the Brookings Institution at the University of Marylan, and Stefano PETTINATO, an advisor to the Millenium Development Goals program, sat down with WEJ to discuss how the economic situation of a country can influence a person’s attitude.

Ten Years of the Dragon

As Western countries continue getting drawn further into the depths of the most recent economic crisis, investors are starting to take a closer look at China and its Eastern neighbors. The region isn’t expecting any “shocks” in the next ten years, but economic growth and prosperity are both very possible.

Breaking the Waves
Most economists agree that the second wave of the crisis cannot be avoided, but at the same time, they do not offer any solutions other than a general sense of panic. Their more sensible colleagues believe that it is possible to soften the blow of this “second wave”.

“We Will See Improvement Soon”
Measures implemented by the participants of the EU in order to improve the situation, are often criticized. Anders ASLUND, a senior fellow at the Peterson Institute for International Economics in Washington, DC, and a former adviser to Russian, Ukrainian , and Kyrgyzstani governments told WEj about who to blame for the crisis and what ought to be done.

To Russia with Love
Foreign entrepreneurs, who have decided to conquer Russia, have long since become used to the particularly Russian mentality. What is a “business, Russian style”? How can you start one here and not regret it afterwards? A foreign CEO in Russia told WEj about the respecting of traditions, discrimination of certain buyers and career aspirations.

A Large Piece of Pie
Milutinovic SLADJAN, Serbian by birth and an Austrian at heart, collected all the money he had in 2008 and relocated to Russia where he established a construction company. Milutinovik told WEj what foreign businessman in Russia should always know.

WEJ’S CHOICE
The Grand Ladies of the Business
The number of women leaders in Russia and in the world is growing. In Russia, traditional “female” professions are still chief accountants, directors of human resources, and financial directors, but 15% of women “Director General” positions are now women as well.

Bonus for the Risk
The aggravation of the situation with Iran’s nuclear program is a key pricing factor in the oil market. Brent and WTI futures have soared by 20% since the adoption of the EU decision to impose the embargo on Iranian oil. The price of the Russian Urals has followed them.

WITHIN SIGHTS
New Law for Debtors
A new wave of crisis, predicted by analysts, will affect the Russian financial market, increasing the size of debt arrears in all industries. There is a hope that adaptation of the law, which will govern relations between creditors and borrowers will smooth over all the negative effects of the above-mentioned financial crisis.

Haute Couture Hotels
Luxurious interiors in the Versace style, multi-colored madness from Missoni and landmark minimalism in Armani style. Now designers produce not only seasonal clothing collections, but also discover new business opportunities. Recently, designers started establishing hotels with their names which fully reflected the philosophy of their brand and allow providing loyal customers with a high level of service.

“When You’re Making a Movie Like “Avatar”, You Don’t Need a Director’s Presence on Set, You Need Creativity”
What are the steps to making a movie, from the fi rst idea for the story to the movie’s fi nal editing? WEj reporters Julia Petrova and Anastasia Yakoleva found the answer when they sat down to talk with Egor KONCHALOVSKY, the Russian producer and director, about everything from Batu Kahn to string theory. Konchalovsksy’s resume includes works such as “Antikiller”, “Escape”, “Canned Food” and “Return to ‘A’”.