Before moving to Russia in 1997 and becoming the head of Renaissance Bank’s consulting team, Neil Withers worked at the Royal Bank and the Canadian Imperial Bank of Commerce –the two largest banks in Canada. Withers was sent to Moscow by CIBC leadership, as part of a joint program between the World Bank and the EBRD designed to exchange information about the international banking experience. When the project shut down in 1998 because of an economic crisis, Neil decided to continue working in Russia as a direct part of the Renaissance Bank’s team, where he worked on a project that offered the bank’s shares on the international market. Thinking back to the time when he first arrived in Russia, Neil remembers Moscow as being boring and uninteresting. “Moscow was lacking bright colors, light, and diversity. But today, with the exception of the long winters and subsequent lack of sunlight, everything seems much brighter to me,” he says. Neil points specifically to the development of the restaurant industry as an example – good restaurants, in his opinion, are becoming much more common, and some of them are even reasonably priced. He remarks that, “Most people view Moscow as part of the ‘wild east’, but the city has really stepped up in terms of its energy and resources, and it has turned into a wonderful place to live.” 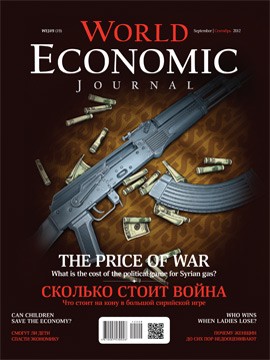 In mid-September of 2008, Withers became the Senior Vice President of VTB Bank and started working on raising the bank’s capital and working directly with investors. Then, he went on to serve as the vice-chairman of the international Silkroutefinancial Group, where he oversaw business development and brokerage services the company provided to financial companies in Russia and Eastern Europe. He says that he took the position of Vice President at Promsvyazbank in January of 2012 to “help the bank move closer towards the international capital markets and to attract new capital”.

“Russia has great potential for the development of the banking industry, but in order to maintain a stable position in that area, almost every bank needs to increase its financial capital,” says Withers. “Promsvyazbank is the second largest non-state bank in Russia, and it has flourished because of its good relations with clients and because of the support that the majority of the shareholders give it.  However, it is now time for the bank to gain greater independence and to issue public shares. “Honesty ad transparency are key priorities in the bank’s activities, and for me personally, it is very interested to work with the bank’s team, and I am delighted to be a part of it and help the bank gain access to the international capital market,” Neil says.

More than 25 years ago, Withers completed his education at the CFA Institute, which, according to him, gave him his “lucky ticket in life”. “Apart from the knowledge and skills I gained at the program, I managed to win the confidence of financial market professional and obtain networking skills that are necessary in almost every field involving banking activity,” Neil says. In his opinion, the ability to inspire trust gives people a huge advantage when it comes to advancing in the banking industry. Mr. Withers find this particular skill especially important when negotiating with international investors and being a representative of a Russian company.

Neil also believes that Russia is significantly different than other countries in regards to its internal organization. In order to succeed in this country, foreigners must be able to impartially asses the difference in culture and environment, while strictly adhering to its high moral principles. “The Russians will always have the advantage doing business locally. Do not spare any resources in developing your employees, so that they can be worthy replacements for you. In my opinion, this is the best way to achieve the maximum amount of benefit from your efforts,” Neil says to the foreign companies who have decided to come work in Russia.

Withers witnessed many banks collapsing as a result of the global financial crisis in 1998. Contemplating the specifics of the banking industry, Neil points out that, “…in order to succeed in the banking sector (as in most areas of business), it is extremely important to maintain a balance. Despite the difficulties that the world’s banks have encountered during the crisis, the banks that had a strong internal organization managed to survive by finding a balance. There is currently a much more convenient banking industry structure that allows strong banks to survive and prosper”.

With his extensive experience in commercial banking, Neil made some very interesting conclusions regarding the Russian banking system. “Russian banks have a come a long way towards gaining stability. In the 15 years that I have spent here, changes have not only occurred in banks, but in regulatory bodies, such as the Central Bank and the Deposit Insurance Agency, as well,” says Withers. According to him, people are only starting to trust the banks now. “The popular Canadian expression, “safe as money in a bank”, is only just now starting to have a positive connotation in Russia. “I am sure that every country needs a stable banking system in order to create a good standard of living for its people, and I am pleased to contribute to the development of the Russian banking system in any way that I can,” Withers says proudly.

Neil is also observing an intense growth of small businesses across Russia. The country still has unoccupied niches in the franchising area of the world’s largest companies, which could still be attractive to investors. Withers believes that the success of “McDonalds” can be repeated in other industries besides fast food, because the market is not yet full – not many international chains are present in Russia currently. The growth potential is huge here, and the best areas for investment are those that have an established dialogue between government and business. “The biggest motivation for Russian regions is attracting investments and creating jobs,” Neil says.

In his opinion, the recent population growth increases the domestic demand for services and purchases. In the Moscow region and in Moscow, for example, there is an amazing growth in housing construction. Other regions, such as the Kaluga region, have become centers for industrial concentration in recent years. The establishment of the automotive cluster here attracted foreign investments, and drew investments to other sectors of the economy as well. There should be a nucleus around the real industrial boom that is taking. And looking at agriculture, we can see that it has been recently developed in many areas throughout Russia. “I think that Russia will become a major international supplier of food over the next few years. This will help diversify the Russian trade and ease its heavy dependency on high oil prices,” Withers says.

Among some of the problems that hinder business development in Russia, Neil points out bureaucracy. He says that some of the formalities connected with the bureaucratic organizational structure in Russia take a considerable amount of time. “It seems that, in Russia, people do not generally realize the value of time. I say this just looking at the amount of time people spen don public transportation or solving simple problems that can easily be taken care of over the Internet instead of wasting time and visiting state institutions,” he comments. However,  Mr. Withers is confident that eventually, the Russian people will realize the need to optimize time.

Neil likes to devote his spare time to the study of Russian culture and history, as well as active recreation. “I recently had the opportunity to go skiing near Sochi, where the Olympic Games will take place two years from now. Large-scale construction is going on there right now, and after the Olympics are over, the site will become a major sports field,” Neil recounts enthusiastically. He also loves riding his bicycle around Moscow – in his opinion, it is a great way to exercise in the morning. Especially because cycling has just become trendy in Moscow not so long ago, and Moscow residents on bikes gain access to many of the city’s most wonderful parks. But the most interesting place for Mr. Withers is the “fantastic” Moscow subway system. According to him, the scope and effectiveness of the Moscow subway is far more advanced than what he has seen in other cities.  “Without its subway system, Moscow would stop,” he says.