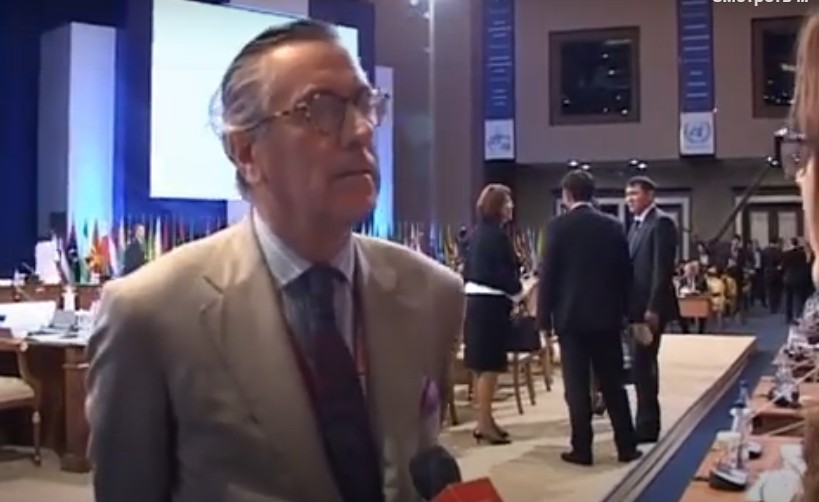 Nestor Osorio, the head of the UN Economic and Social Council, shared his ideas with a correspondent of World Economic Journal about combating unemployment, and proposed creating a new bloc of countries, rather than expanding the BRICS.

The most acute and frequently discussed question today remains how to get out of the crisis. Many hope that the creation of G Global might change the situation. How do you, as the President of ECOSOC, view this idea? To what extent could such a grouping solve the crisis?
All of us today could be called witnesses to a special moment of history. The economic crisis has affected all developed countries and has accordingly had an impact on developing countries as well, especially in the areas of financing for development and technology transfer. We could get out of this situation if world leaders would meet, not just in small groups among themselves, but rather create a more representative, multilateral, and transparent system. The G Global strategy is precisely to create such an all-inclusive organization, comprising large as well as medium-sized and small countries. When discussing the crisis, I generally insist that there has to be a connection to the private sector, since that in particular can become the driver for revival and development. And governments, the international community, and international organizations should help one another and provide the necessary stimulus for solving the crisis and all the problems it entails. Such problems as the instability of the financial and banking system, and most important of all, unemployment. When a country has 15%, 20%, or 30% unemployment, especially among the youth, you’ve got a ticking time bomb.

Since we are talking about unemployment, which is causing more and more distress, what realistic solution do you see to this problem?
I think it is such a complex question that it is impossible to find an ideal solution. It seems to me that the first priority is to stimulate the entrepreneurial spirit. Institutional authorities and governments have to create favorable circumstances for people to utilize their skills and experience, and also to permit people and companies that are working in science, technology, and innovation to create new openings and jobs. This topic is discussed at every forum. And people always explain that they do not need to be given a job; what they need is for the authorities to provide conditions whereby they can create their own jobs. Although, of course, one of the greatest problems here is the lack of the necessary infrastructure, especially in the developing countries. Perhaps what we need is a well-thought-out plan of public works and investment, which will allow the private sector and politicians to create new jobs and opportunities to expand the workforce. So the authorities and the private sector should in any case use their imagination and inventiveness to create jobs for people. For example, we can think about easing taxes as well as stimulating job-creation and opening up new areas of development. I mentioned public works, and I’ll explain why. When a country builds cities and links them up with good roads, it is much easier to ship goods, and this helps create new areas for development. It makes it possible to increase the productivity of the country as a whole.

Some countries, such as Kazakhstan, allow foreign companies to build infrastructure on their territory. Thus foreigners create jobs, although not so much for those who live there, as for themselves. How successful is that sort of method for solving the jobs problem?
Stimulation through foreign investments is, of course, very important. Investments from abroad always generate increased wealth within the country. And all of us now need to find ways to increase our countries’ capital. Wealth is created when people have jobs, because when they get paid, the money goes into the country’s economy, and thus the state redistributes the citizens’ income and savings. This is a kind of disguised way of attracting foreign investment with the goal of determining which sectors of the economy should give priority to investors, and which sectors require special regulation. I can give an example of a sector that needs special regulation: the purchase of land by foreigners. The use of this land must be thought through very well and carefully. Some states are buying land now in other countries to produce food, but the food goes to the country of the investor, not to the people who live on the territory where it is produced. Another problem is, again, connected with unemployment: For example, the Chinese are signing many contracts with different countries. They arrive, they build roads, tunnels, and other important infrastructure, but on one condition: that they bring in their own workers. And if there are problems at the workplace, it is difficult from a political point of view to explain to people why the country is attracting foreign workers, when the state cannot provide jobs for its own citizens. All these aspects should be deeply analyzed.

In recent months, we have observed that interest in investment has waned toward all countries; but while the level of FDI in developed economies has fallen quite a bit, developing countries have not lost much in the inflow of foreign funds, compared to the previous year. Can such a change in priorities be considered long-term, or is it just a temporary phenomenon, due to the fact that during the crisis the developing countries are still growing?
I think this matter involves the policy of the developing countries. Let’s take, for example, the countries of Latin America. Today, they get a huge amount of investment from the United States and Europe, that is, from countries that need investments themselves. But people there are not investing in their own country, because they think that greater profitability and capital accumulation are possible in countries such as Brazil, Peru, Colombia, Chile, and Mexico. That is, in economies that were previously in crisis and were able to deal with it. And besides, this is quite a dynamically developing region, as is evident from the huge number of free-trade agreements being established with them. A big market, new customers and suppliers – all of these opportunities are very attractive for foreign companies. The same story occurred in South Asia: Investors were interested in developing many sectors in these countries, such as metallurgy, various industries, etc.

You mentioned Brazil and the developing countries, which immediately brings to mind the BRICS grouping. Do you think Kazakhstan and Indonesia might join that bloc of countries and form a BRICSIK? Would that be helpful?
I think it’s a very healthy aspiration, since the BRICS is a bloc of large and very important economies. But these economy cannot be termed just “developing,” since they have already reached a higher level. Indonesia, Kazakhstan, Colombia, Vietnam – these are another section of the developing countries; they are already on a path of intensive development, but their results can be much better with greater productivity, different policies, and the distribution of savings. Therefore it seems to me that they could create their own system, to develop relationships with and help each other, including on issues of attracting funding from developed countries. I think such an association would be much more successful than the expansion of the BRICS. Today such countries as Mexico, Colombia, Chile, and Peru are creating a Pacific Alliance, which Costa Rica and Canada may soon join. These economies are also developing very successfully and could soon set up free trade zones, for example with Asia or any other blocs of countries.

BRICS Will Extend Its Boundaries to Become BRICSIK