Articles / Rubric: Life-Style
A Little One for the Gentlemen
December 2012 | Life-Style 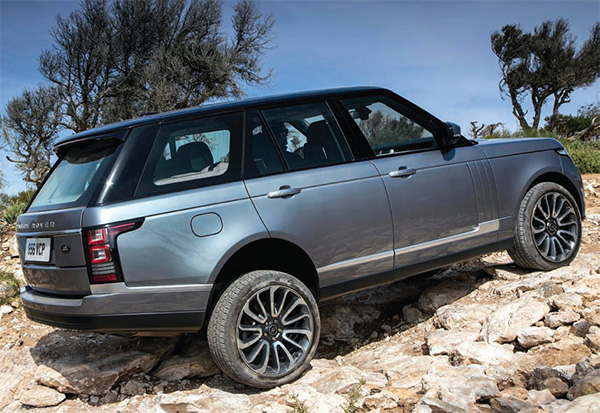 The release of the small Evoque crossover doesn’t mean that Land Rover isn’t staying true to its roots. Just take a look at the new Range Rover. The British have achieved a truly unique fusion of history and hi-tech.

In today’s word, there is less and less space for the massive dinosaurs with their multi-liter engines. SUVs are losing weight, transmissions are being simplified, and engines are shrinking in volume. Compact crossovers with turbo motors now rule the roost. Under pressure from environmental regulations, Land Rover, which only produces four-wheel-drive SUVs, first released the Freelander in its front-wheel series. Then came the Evoque, its first real car, which is also available in a two-wheel-drive version. But what about the new generation of the flagship Range Rover? After all, it shouldn’t be worse than its predecessors. It shouldn’t have lost anything in dimensions, power, or maneuverability. It should be an ironclad fortress. Though the Range owner may only resort to the help of the off-road transmission a couple of times, he should be assured that his car can overcome any obstacle.

Just as James Bond took shelter in his childhood home at Skyfall, Land Rover began to seek refuge in the past. The first Land Rover was introduced in 1948 and was more of a utility/agriculture vehicle, even including a power take-off drive for linkage-mounted equipment. But the body was made out of aluminum, the “aircraft metal”  which became cheaper than steel in the postwar years and was less subject to corrosion. (The Defender, the classic cross-country vehicle that has seen only minor modifications to the present day, also has an aluminum body.)

Utilitarian and inexpensive SUVs quickly found a following. But at the same time, the company began thinking about creating a luxury all-terrain vehicle with a closed body. The Station Wagon model with its wooden frame and aluminum trim was designed by Tickford for Aston Martin and Rolls-Royce.

The car could hold seven passengers and its outfitting was impressive for those days – heater, windshield wipers, leather seats. But this car turned out to be too expensive and its performance wasn’t very impressive either.

The second attempt came 20 years later. A car named the Range Rover came a pioneer in the luxury segment of the Land Rover brand, and, in fact, the mother of all luxury SUVs. Compared with present times, that boxy Range looks quite modest and the three-door body isn’t practical in the least. But it was a breakthrough for Land Rover. At that time, the Range Rover could have stood next to the Mona Lisa in the Louvre as an example of modern art. The spring suspension provided decent comfort while the powerful American V8 engine gave good performance. The body’s steel superstructure was lined with aluminum panels and was mounted on a ladder frame. This vehicle stayed in production for 26 years, the last two of which were in parallel with the new, Series II. Gradually, the proportion of aluminum used in the construction of the classic Range Rover declined. Series III cars were already getting steel monocoque bodies and aluminum was used only for external door panels and the hood and trunk lids.

Created back in the days when the company was owned by Ford, this model had a 12-year run. That’s not 26, of course, but considering the current rate, it was quite a long time. Since there was no more room for improvements, a new car had to be created from scratch.

Unveiled at the Paris Motor Show, this fourth-generation Range Rover resembles its predecessor, the L322. At first glance, you’ll see the headlights have little tails in this definitely new design. This isn’t the result of a heavy restyling, but rather a completely new car. A resemblance to the previous model was done for the sake of buyers’ conservative tastes. In order to create an ultra-light body, engineers turned to past experience and brought back aluminum. In the end, the car’s monocoque body is made completely out of the light metal, with all the details attached either with rivets or a special glue. The body frame of the new Range Rover alone is 180 kilograms lighter than the steel version. And it isn’t just the car’s hinged panels, but the suspension arms are aluminum as well, except for the rear ones. The top part of the tailgate is made of plastic. In fact, there are only about two dozen steel parts. As a result, the new Range Rover weighs 357-420 kilograms less than its predecessor. Yet is it larger: Its length was increased to 4,999 mm, and the wheelbase was increased to 2,922 mm. The height, though, decreased by 20mm.

Although the body doesn’t seem streamlined, it is the most aerodynamic Range Rover yet, with a drag coefficient of 0.34. This was accomplished in part due to the installation of smooth panels underneath. The result was quick to manifest itself. Even though the diesel V8 engine produces 339 hp of power, average consumption decreased 2.5 liters. Acceleration fell by one second, and now the car reaches 100 km/h in just 6.9 seconds.

Engineers have found it possible to equip the “thinner” SUV with a diesel V6 (248 hp) engine. This powertrain was already used in the Discovery and Range Rover Sport models. In addition to its cost-effectiveness, it provides good performance. The gasoline engine is a 5-liter V8 and is naturally aspirated and supercharged. All powertrains come paired with a ZF eight-speed automatic transmission. The automatic gearshift modes are selected by a rotary knob, an innovation that had been tested in the previous Range model.

But the gas pedal on the Supercharger has been damped, since the 510 horse engine provides more impressive performance than its heavier predecessor. This car can reach 100 km/h in just 5.4 seconds – 1.5 seconds faster. The roar of the engine during acceleration even penetrates the quality noise insulation of the cabin. For a five-meter SUV, the vehicle handles quite well, especially thanks to Roll Stability Control that helps prevent a roll-over. True, the SUV doesn’t have reaction force control on the steering wheel.

Many manufacturers are turning away from advanced off-road transmissions. For example, the Volkswagen Touareg offers a transfer case for extra as part of its off-road package. Having reduced the weight of the body, however, Land Rover engineers found it impossible to sacrifice the transmission – the title “King of the Off-Roads” requires it. The Range still comes equipped with symmetrical all-wheel drive and a low-range reduction gear ratio that was increased to 2.93:1. Moreover, cars with the V8 engine come complete with the rear self-locking differential option. Terrain Response technology has transformed the car, with modes that are best for driving on sand or in snow. Here again, they are selected by a convenient rotary knob. There is an additional automatic mode that chooses the optimal setting depending on the coverage and even changes the force applied to the steering wheel.

Off-road handling was improved with wheel travel increased and a maximum clearance of 303 mm. The air suspension now has two off-road settings, the first of which is available at speeds below 50 km/h. Above this, the body is lowered by 25 mm for a more comfortable ride.

Air intakes are now located under the hood on both sides of the engine. This has allowed its wading depth to be increased from 700 to 900 mm. The classic Series III air intakes resemble decorative plastic “gills” on the door.

Off-road abilities, however, are not as important for such a car as is comfort of the passengers and the luxury that envelops them. The quality of the materials is better, but owners of the previous series will feel right at home in the cabin of the new Range – everything is familiar and easy to understand. The trunk release button has been moved to the left side. The center console is shallower, almost like the Range Rover Sport. The analog clock – a traditional feature in premium cars – was removed to free up the console. Climate is controlled by only three buttons now instead of five. Each has a display, for example, the one that shows the temperature.

For rear passengers there are two separate seats with massage and ventilation controls, separated by a central armrest. There are more ways to individualize options – you can order different color combinations for the body and the roof. The combinations of materials for the interior are almost unimaginable. Alloy wheels are also available in a new design.

The creators of the Range Rover managed to keep the classic, familiar features of this model while making it even better, faster, more economical, and with better passability. It is less smug and more luxurious – that is the new Range in a nutshell.

There are no comments yet. Why donít you leave your own comment?

Sven Alkalaj discussed the work of the Economic Commission for Europe in regulating the economy.
More