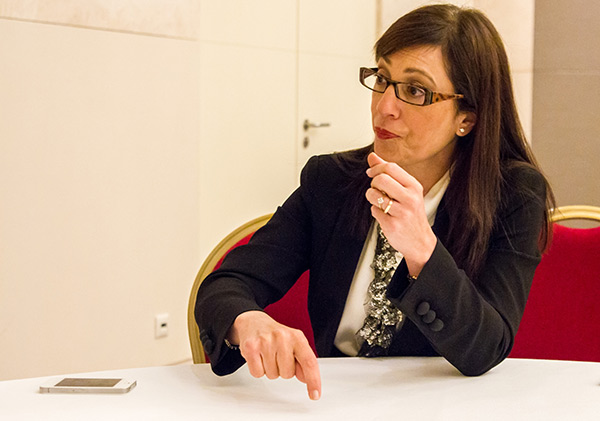 By 2015 the emerging markets will have become large and important economies and will stimulate a large portion of the world’s growth. The size of the BRICS economies could triple, reaching $60 trillion. Maria Pinelli, Global Vice Chair of Strategic Growth Markets at Ernst & Young, discussed this in an interview with WEJ.

Ms. Pinelli, what is stimulating vigorous economic growth today in the emerging markets?
Worldwide, the middle class is on the rise. In markets where the average consumer can spend $10-100 a day, we are observing a brisk turnover of goods, which, of course, has a substantial growth effect on the economy. I don’t mean just China, Brazil and India, but Russia as well, which is still in the beginning stages of discovering its economic strength. We are very optimistic about the development of all the BRICS economies. We have invested more than $300 million in emerging markets over the past few years and are going to continue investing capital.

Nevertheless, China and India remain the key markets?
Yes, these are the most rapidly growing markets. The business models of China and India are completely different. China has become the second-largest economy in the world; it is continuing to grow and will eventually be the world’s leading economy. India, in terms of GDP at dollar parity, is the fourth-largest economy in the world. And by the way, recently there have been some important regulatory changes in the legislation there. We think that these economies will continue to grow.

Would you say these countries are fully integrated into the global economy?
China and India are actively involved in the global economic cycle and are demonstrating their competitiveness. They are making changes to their tax regulations in order to attract more interest from investors worldwide. Today, China leads the world in IPO activity. Following in their footsteps, other countries have begun increasing their capital, such as Malaysia, Indonesia, Singapore, and India. In fact, their capital is growing, as is Russia’s. Unfortunately, the problem China and India are facing is a lack of qualified staff, although there is a huge demand for it.

So there is no one to develop a modern economy?
The number of professionals per capita in these counties is much lower than in developed countries. Our goal is therefore to educate as many people as we can, as quickly as possible. Our partners in India and China are actually funding educational programs for young people from their own pockets, allocating funds to schools; in short, helping students any way they can to learn management skills and become highly qualified, in order to keep up with the modern economy and develop the future. Speaking of the future, I want to mention women as a separate market…

So women can be viewed as a separate market that will be extremely important for this new economy?
Just as we think about markets in China and India, we can identify women in the same way. They control more than 85% of spending on non-essential goods. Women are diligently studying; 60% of them in the U.S. alone are college graduates. And thus they will be important for future economic reforms.

How are things in the Middle East?
We view the development of markets in the Middle East, Turkey, and Vietnam optimistically. More than 50% of the population are youth under the age of 25, who are looking to the future, seeing the possibilities, and asking themselves “What will I become?” I think we will see more entrepreneurship in these countries in the near future. We also think Africa will be interesting for investors. It is rich in resources and has a strong work force. We are very optimistic about parts of Southeast Asia.

Is it possible that Mexico might become the 5th largest global economy?
We are also observing growing markets like Mexico and Indonesia. Indonesia is the fourth most populous country in the world. These countries are investing capital and know how to properly operate in a difficult economic situation. Indonesia and Mexico may become among the ten best economic systems in the world. For example, Mexico has the goal of becoming the fifth-largest economy by 2020-2030. And it is completely possible.

What is your forecast for the eurozone’s economic recovery?
Overall, the outlook is not optimistic and we see the second half of 2013 as the time for important decisions to be made. We see some clear signs of progress, such as increasing cooperation among EU member states. When there is close cooperation, we get a surge in the market; but once EU members descend to particulars at their meetings, the market falls, at least for a little while. A key barrier currently is an agreement between the financially distressed countries and the budgetary constraints that the capital-rich countries want to impose on the poorer ones. But I think you should not economize on the road to recovery. This could be said with respect to any company.

There are no comments yet. Why dont you leave your own comment?

Virginia Cram-Martos talked about the difficulties that are arising in trade, using the example of Kazakhstan.
More