The number of people affected by hunger globally rose to as many as 828 million in 2021, according to a new UN report that provides fresh evidence that the world is moving in reverse, away from the Sustainable Development Goal of ending hunger, food insecurity and malnutrition in all its forms, by 2030, when the SDGs are supposed to be realized.

That represents an increase of about 46 million since 2020, when the COVID-19 pandemic plunged the world’s economy into a downward spiral, and 150 million more since 2019.

The 2022 edition of The State of Food Security and Nutrition in the World (SOFI) report presents updates on the food security and nutrition situation around the world, including the latest estimates of the cost and affordability of a healthy diet.

It also examines ways governments can repurpose their current support to agriculture to help make healthy and nutritious food cheaper, mindful of the limited public resources available in many parts of the world.

The report is a joint publication by the Food and Agriculture Organization (FAO), the International Fund for Agricultural Development (IFAD), the UN Children’s Fund (UNICEF), the UN World Food Programme (WFP) and the World Health Organization (WHO). 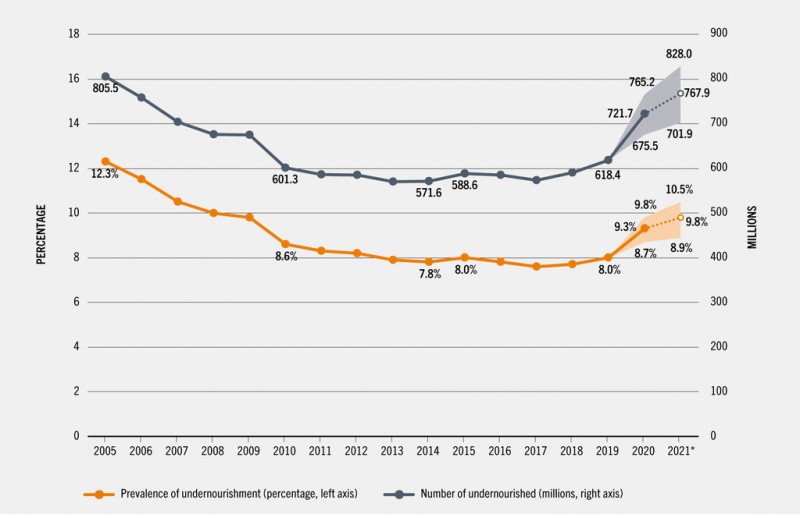 The numbers tell a grim story

Progress is being made on exclusive breastfeeding, with nearly 44 percent of infants under six months, being exclusively breastfed worldwide in 2020.

However, this is still short of the 50 percent target set by the 2030 SDGs.

The world is moving further away from ending hunger, food insecurity & malnutrition in all forms according to #SOFI2022.

Overall, two out of three children are not fed the minimum diverse diet they need to grow and develop to their full potential, the report notes, with concern.

Looking forward, the SOFI analysis projects that nearly 670 million people (8 percent of the world population) will still be facing hunger in 2030 – even if a global economic recovery is taken into consideration.

This is a similar number to 2015, when the goal of ending hunger, food insecurity and malnutrition by the end of this decade was launched under the 2030 Agenda for Sustainable Development. In other words, the SDGs will have failed to take the world forward battling hunger.

The Deputy Secretary-General Amina Mohammed, said that the figures were a “shocking report card of our efforts to end hunger – and we can, and must, do better.”

She noted that it includes billions who have limited or rationed their food intake, or started eating food that is less nutritious, because they just can’t afford alternatives.

“These are people whose lives, livelihoods and prospects for a fruitful and dignified life are being crippled, with their futures eroded and potential and aspirations held back”, she said, speaking at the SOFI launch in New York.

“They need our crosscutting resolve. The evidence presented in this report is compelling as it is outrageous when we see that children in rural settings and poorer households, whose mothers received no formal education, were even more vulnerable to stunting and wasting.”

The report also highlighted the damaging impact of Russia’s invasion of Ukraine, which has disrupted the supply of staple cereals, oilseeds and fertilizer from both nations, as well as international supply chains – provoking soaring prices as well as ready-to-use therapeutic food for severely malnourished children.

This comes as supply chains are already being adversely affected by increasingly frequent extreme climate events, especially in low-income countries, and has potentially sobering implications for global food security and nutrition.

“This report repeatedly highlights the intensification of these major drivers of food insecurity and malnutrition: conflict, climate extremes and economic shocks, combined with growing inequalities,” the heads of the five UN agencies wrote in this year’s foreword. “The issue at stake is not whether adversities will continue to occur or not, but how we must take bolder action to build resilience against future shocks.”

A South Sudanese widow, whose husband was killed the day after she gave birth to their youngest child, is now the sole provider of their family.

FAO Director-General QU Dongyu, noted that low-income countries, where agriculture is key to the economy, jobs and rural livelihoods, “have little public resources to repurpose. FAO is committed to continue working together with these countries to explore opportunities for increasing the provision of public services for all actors across agrifood systems.”

“These are depressing figures for humanity”, said IFAD President Gilbert Houngbo. “We continue to move away from our goal of ending hunger by 2030. The ripple effects of the global food crisis will most likely worsen the outcome again next year. We need a more intense approach to end hunger and IFAD stands ready to do its part by scaling up its operations and impact.”

The head of the UN Children’s Fund, Catherine Russell, said that the unprecedented scale of the crisis, “demands an unprecedented response. We must double our efforts to ensure that the most vulnerable children have access to nutritious, safe, and affordable diets…With so many children’s lives and futures at stake, this is the time to step up our ambition for child nutrition – and we have no time to waste.” 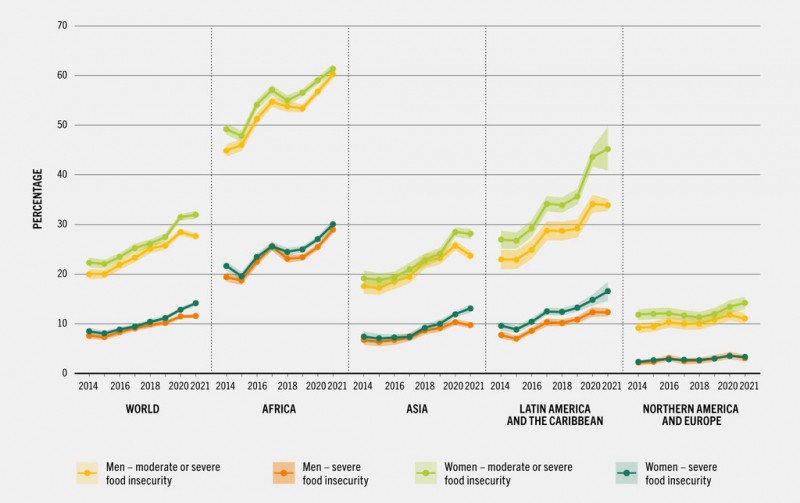 Globally and in every region, the prevalence of food insecurity is higher among women that men.

WFP chief David Beasley, said there was “a real danger these numbers will climb even higher in the months ahead.”

The food, fuel and fertilizers crisis heightened by the war in Ukraine, could lead to famine, and result in “global destabilization, starvation, and mass migration on an unprecedented scale. We have to act today to avert this looming catastrophe.”

The evidence suggests that if governments repurpose the resources being used to incentivize the production, supply and consumption of nutritious foods, they will contribute to making healthy diets less costly, more affordable and equitably for all, according to the SOFI report.

It also calls on governments to do more to reduce trade barriers, which would help lower the price of nutritious foods, such as fruits, vegetables and pulses.